Kenpo Karate is a comprehensive system of modern self defence and fitness. The foundation of Kenpo Karate is SELF DEFENCE but you’ll find that Kenpo Karate offers you and your family many, many more benefits including (but not limited to): 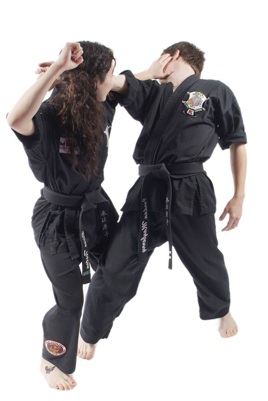 In addition, parents often find that our programs help children:

* Learn a Sense of Achievement and Accomplishment

* Channel their Energy in a Positive Fashion

American Kenpo was developed by the late Mr Edmund Parker who took the more traditional Chinese Kenpo as taught to him by the late William K. S. Chow and modified it to suit modern day needs. It is based on geometry, physics and body mechanics, not just history and tradition. Its arsenal of self defence techniques is the most practical available in martial arts training and a student’s training proceeds in distinct stages.

The Studio Martial Arts  is a much improved system of Self Defence programs based on an integrated approach that will provide continuity of learning for students from as young as 4 years of age all the way through to adulthood. The structure of our individual Kenpo Karate classes is generally:

Adults Kenpo
17 years and above

Importantly, each of these programs provides essential learning that is more appropriate to the age and abilities of the students. Where previous programs were ‘Stand Alone’ (i.e. students had nowhere to go beyond completing a Kid’s program), the Tigers, Dragons and Adult programs all compliment and build on each other so that there is a formal recognition of prior learning (RPL).

Note: The age limit for class groups may vary at the discretion of your Instructor, particularly at our satellite schools where availability of classes is currently restricted to Tigers, Dragons and Adults.

What is the outline of the Studio’s Kenpo Karate program?

There are ten (10) levels of achievement to the Kenpo Karate program.

Students commence their journey as a White Belt. All basic moves, techniques, forms and sets will be taught during class time. Our manuals have been designed as a reference tool to assist students with their progress and training.